“We feel that Fletcher’s cartoon, and the ineffectual dialogue it spurned, qualify it among the great exercises in futility,” said Melvin Morris, an archivist at the Cartoon Research Library. “It’s truly a modern relic.”

Fletcher, who has proven himself woefully unable to articulate the significance of the cartoon, seemed nonetheless honored by the recognition. “Perhaps unwittingly, I drew a cartoon whose notoriety will far surpass anything I’ll ever accomplish during my legal career,” said Fletcher. “I’ve got to learn how to say what I mean and mean what I say,” he added. 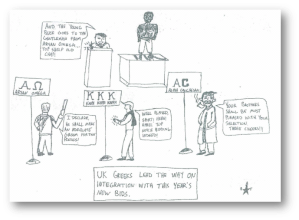 Fletcher’s October 5, 2007 cartoon figures to be a centerpiece of the Exercises in Futility exhibit.

According to Morris, the exhibit organizers selected cartoons according to a criterion of disconnect: “The higher the degree to which the scurrilous nature of the visual image hindered widespread awareness of the true critique being levied by each cartoon, the more we desired to feature it in our gallery,” Morris explained.

As the social landscape of UKs campus demonstrates, Fletcher’s cartoon is the quintessential example of Exercises in Futility.

“I remember that those days and weeks following Fletcher’s cartoon were dark times, but somehow we remained unscathed,” said Shelton A. Madden, a member of UK’s Phi Kappa Psi fraternity. “We’re not racist, we just have to be very selective in the rush process in order to make sure that our new brothers will fit into the community,” Madden continued. “I believe that Phi Kappa Psi is a brotherhood of honorable men, courteous and cultured, who pledge throughout their lives to be generous, compassionate, and loyal comrades.” Madden immediately denied any connection between Phi Kappa Psi and the Communist party. 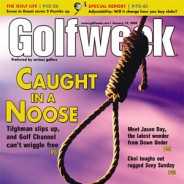 Fletcher’s piece, which ran in the October 5, 2007 issue of the Kentucky Kernel, will be featured in Exercises in Futility alongside Barry Blitt’s July 2008 New Yorker cover, which depicts Barack Obama as a freedom-hating terrorist, and the ill-fated January 2008 Golf Weekly swinging noose cover. The exhibit begins on September 15 and runs until December 1.

“Fletcher’s work joins a long lineage of American political cartoonists who have been unable to get their message across,” said Morris. “And so we celebrate them today.”